Juy 21st. Today was the day my C-section was 'scheduled' for. Ha! Best laid plans. I had a feeling when we were making that plan that we wouldn't last that long. If we had, it would have meant Kaia was stronger, older and heavier. Perhaps she might not have needed so much ventilatory support at birth. But maybe she would have anyway? We'll never know. Today is also the hottest day on record for July 21st in my area...ever. If she had been born today, I would have never got to go outside and experience it!

Kaia is doing well in her new digs. We went to see her last night in her new NICU (so close by!). It's MUCH smaller than the old one. I'm pretty sure only 3 nurses work at a time and there are maybe 10 babies max. It's a lot quieter, which I like, since it might be more restful for Kaia and certainly less noisy for us when we visit. I'm still a little nervous about her new Level 2 status...but I keep thinking "it's this, and then home where there will be no monitors and no O2 sat probes". So this is a good in between step. It's a little challenging to get used to a new NICU though. New nurses, new rules, new expectations of us. It will be so lovely to be 'in charge' when she comes home. I now understand how much it sucks to have to 'ask' to hold your own kid.

Here's another photo! She looks like a mini version of her Dad in this one. 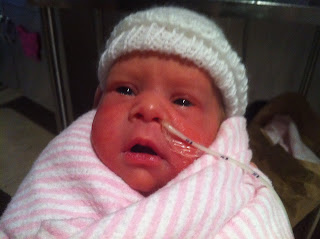 Some of you have also been questioning how I am doing (thanks for not forgetting about me in the rush to ooh and aww over the baby!!!)

The answer is that I'm doing okay, actually. I had a low transverse incision through both my skin and my uterus (yeah!!!) so healing with that is going well. We took the steri-strips off a few days ago and I think the incision will be barely noticeable once everything heals up. I'm pleased about that. I already have a lot of scars on my chest and back from my heart surgeries as a kid so I wasn't looking forward to having another one.

Recovering from a C-section is definitely harder than from a vaginal delivery (unless you have a lot of tearing...in which case I concede defeat, cuz' that might just suck worse). I have found the associated swelling to be the worst part. For the first week, my belly, feet, ankles and calves were quite swollen by the end of the day after walking to and from the car to the hospital. My legs would start to feel like I was dragging around lead weights and only getting into bed at the end of the day, and having the cool fan blow on them, would make them feel better. It was bad enough that standing by Kaia's isolette was difficult. The swelling slowly seems to be improving. Last night only my feet were mildly swollen as I crawled into bed around 10pm.

Recovery from bed rest is going to take longer than C-section recovery. I can tell I've lost muscle tone, especially in my legs and back. The lack of tone is also probably making the leg swelling worse. The other night Brian was busy starting to paint Kaia's room and asked me to get him something from the basement. The walk back up all the stairs to the top floor felt like I was mountain climbing (we live in a multilevel town house...hence a lot of stairs). I was huffing and puffing and could have used one of those grappling hooks to haul my butt up the last leg of the trip. Seriously, there should have been a 'rest spot' along the way. With water and a snack provided.

However, I'm determined to get back into shape. Which will be difficult initially as I'm not suppose to 'exercise' for 6 weeks (is stair climbing considered exercise...cuz' it sure feels like it!) After that, I hope Kaia will be home and I can start taking her for walks in her stroller (thanks for your help on that everyone!!!) to strengthen my legs and back. I could start working on my arms, which could use some toning too, but I was also informed by my the nurse at the hospital that I'm not suppose to lift anything over 10 lbs for 6 weeks. I keep looking at all the mountains of stuff lying around my house (it needs cleaning) and wondering "does that weigh over 10 lbs?" So I've stuck to sorting out all the paperwork and un-dealt with mail lying around in piles. What I wonder though is "what if your BABY weighs over 10 lbs?" I could be wrong, but I'm pretty sure it's necessary to pick up your child in the first 6 weeks after birth...if only to feed him or her occasionally.

All in all though, I feel I've done fairly well physically with this whole pregnancy thing. In fact, when I think about it, in the last 20 months I've been pregnant twice (lasting a total of 55 weeks + 5 days), been on bed rest for almost exactly half of that time (27 weeks + 5 days). However, my heart has done just fine and seems pretty much the same as when I started. I never had any major 'pregnancy' illnesses such as pre-eclampsia, extreme vomiting, or gestational diabetes. I had very few minor 'pregnancy' complaints either. I almost never had heart burn, only minor nausea and vomiting in the first trimester, almost no swelling and no stretch marks. I weighed myself yesterday and I'm only 12 lbs away from my pre-pregnancy weight (although I've lost muscle too, and that weighs more). I've also discovered I'm a good 'cow' too. I'm pumping between 70 to 120 mls each pumping session. Over 700 mls in total yesterday. That's enough to easily feed a 9 to 10 lb baby. Even my placenta, while totally abnormal looking, managed to get both of my kids to the 'alive' point at birth.

So really, my only complaint is my amniotic sac. That tiny little membrane of mine just couldn't keep it together long enough to have a nice normal pregnancy (TWICE). The rest of my body seemed to be on board...why couldn't it?

If you've had a C-section how did you find recovery? How long before you felt normal again?
Posted by Emily at 10:13 AM