8 weeks in cast, 32 sleeps until freedom!

It's Friday! I took Kaia for a nice stroller ride today and part way I took off my hats, mitts and scarf it was so warm. Shades of spring to come! Exciting!

I'm feeling a little better about the whole head ventricle thing. I was anxiously trying to get a pediatrician appointment for Kaia this week, when I remembered that she had her RSV shot on Thursday at the local hospital. Kaia gets this shot once a month from November to April in order to prevent Respiratory Syncytial Virus. Most children under two get RSV at some point, which generally causes a bad cold. However, in preemies it can lead to hospitalization with bronchiolitis or pneumonia and can, in rare cases, be a killer. So I've been happy to lug her to her appointments (inevitably in bad weather) once a month.

On Thursday we arrive at the hospital clinic for her shot, the nurses check her out, weigh her, take her temperature and listen to her heart and lungs. Then the pediatrician comes in and chats and makes sure she's good to go for the shot. I was happy to see that it was one of the pediatricians we met while Kaia was in the NICU. I've seen him a few times and he's actually my friend's daughter's pediatrician. He's a nice guy and I trust his opinion. So when he asked if Kaia had been well I told him about her ultrasounds last week and about the recommendation from the neurosurgeon to go in for a head CT, and that I was a bit upset about the whole thing.

He checked online and was able to pull up the ultrasounds she'd had downtown last week. He looked over the reports and came back and told me that on the labia ultrasound they couldn't see a hernia, but because the cast covers part of the area they would have liked to image they are recommending that it be repeated once she's out of the cast. So, good-ish news, but not definitive yet. He also said that the head ultrasound states that she has mildly dilated ventricles, the left slightly more so than the right, but that it doesn't seem that serious to him. He asked me why the neurosurgeon was recommending a CT, and when I told him I wasn't totally sure considering she's ALWAYS had slightly dilated ventricles and we've just been following it with ultrasounds, the pediatrician suggested that we rethink the whole CT plan. One CT is basically like taking 300 x-rays all at once with all the radiation that involves. It would be worth it if something was obviously going on with Kaia, and it could definitively rule in or out certain conditions, but I agree with him that it does seem a little extreme a test to perform on a perfectly healthy baby.

So next week I'm hoping to get in touch with the nurse co-ordinator for the neurosurgery clinic. She might have a better idea as to what the neurosurgeon might be thinking (other than "hey, I'm a neurosurgeon, I like brains! I like picture of brains! I like scanning every kid I can get my hands on just to be *SURE* they don't need a shunt!"). She might be able to get him to change his mind so that we follow Kaia's brain with ultrasounds rather than a CT. I think I would be more comfortable with that at this point.

In other news, Brian and I are getting more and more excited to think of Kaia without her cast on! One of the big things we are looking forward to, is starting some solids. So far, I've put a few little finger tip sized amounts of things in her mouth, just to see if she'll like them, but I'm hoping to go more with the 'baby led weaning' approach and get Kaia set up with some easy to hold baby foods (bananas, avocado, yogurt, cooked noodles?) and let her decide what goes in her mouth and what doesn't. Another friend of mine spoon fed her kid every meal for over a YEAR (still does with her yogurt and she's TWO) and it just looks like WAY too much work. We don't yet have a high chair for Kaia, but I think we're going to buy her one as her 'out of cast' graduation present. I'd like a wooden one, so we might need to do some shopping around.

One of the things we have continued to be able to do while she's in the cast, is use the potty. On the advice of J. whose daughter is 20 months old and often wearing underwear, we got Kaia a potty for Christmas (the baby Bjorn one) and have been using it usually a couple of times a day. It's the perfect shape for her in her cast, and Kaia has become pretty good at peeing when she's on there. She still goes in her diaper all the time, but I'm hoping because she's already 'use to' the potty, it won't be such a big deal to get her on the potty more and more often as she gets older. We'll see how that goes.

Sleeping has been going a bit better around here, although we still have a ways to go. Kaia has been going to bed between 7 and 8pm generally and sleeps until about 11:30pm. This is usually right around the time I'm wrapping up with my last pump before bed, so I feed her and then go to sleep. She gets up again anywhere between 3:30am and 5am, eats again, and goes back to sleep. Then up again at 8am for another bottle. At this point, I need to pump, so I bring her into bed with me, she eats, I pump and then we usually have another nap together and get up for good around 10am. She might have a short cat nap anywhere between 11:30 and 12:30 that is about 20 minutes to half an hour, and then if I'm lucky she'll have a 2 hour plus nap in the afternoon. I think this is pretty good, although I would LOVE to cut out the middle of the night feed...but hey...baby steps right?

My question is when will she not need to eat over night? I know this is probably different for different kids, but when she wakes up in the middle of the night, we've always given her a bottle and she always seems to eat quite a lot at this point (120-150mls). Knowing that she will eat so much, I'm reluctant to NOT give her a bottle at this time. How do you tell if she's waking up because she's hungry or because she just wants to 'suck' to sleep? I would assume she wouldn't eat a lot if she wasn't hungry...but maybe it's just become habit at this point? Hard to distinguish need vs. habit in a baby. This is another thing to tackle once she's out of the cast and I don't have to get her up anyway to change her diaper overnight.

Despite her cast challenges, Kaia really is a fairly happy baby. She still does that 'whine' thing that I mentioned a few posts ago, but it's more so now only when she's tired or bored. Since Brian made her a special chair that she can sit upright in, she's much happier sitting and watching us. Here's a picture so you can see what I mean: 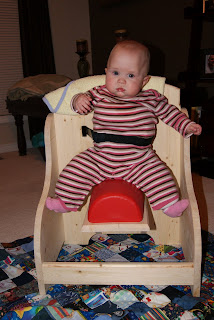 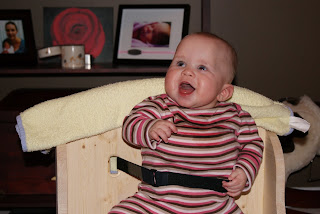 I also try to 'play' with her on the floor. It's hard because she can't move anything but her arms, but we try. I can't wait until she can sit and I can roll a ball to her, or she can kick her legs and start to roll over to grab things. She does make the BEST faces though! I wish I could capture more of them on film. 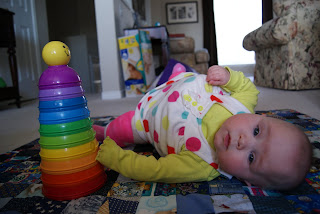 As spring approaches, I am starting to think more and more about what we're going to do when I go back to work the second week of August. I've just heard that my contract job on the Medical Day Unit is extended again so I can go back to work for my 2pm to 10pm shift, 4 days a week (Monday-Thursday). I would need to leave for work about 12:45pm and Brian gets home about 5pm, so I really only need someone for the afternoon 4 days a week. Brian's parents are retired and keep saying they would love to look after Kaia, but I don't know exactly how much time they want to commit to. Once a week? Twice a week? All the time? I don't think so. Which means we will soon have to really start thinking about child care for at least part of the week. We've left Kaia a few times in the care of our parents, but it scares me a little to think about leaving her with a stranger!

Anyway this post is getting long, and I must be off to bed.

So that's a Friday wrap.