Sorry I haven't been getting updates on here as regularly as I would like. It's been a bit of a hectic week. The visitation and funeral for my Grama was yesterday and today. It was nice to see people I have known for years but haven't seen in awhile. It was amazing how many had heard of Kaia and were obviously thrilled to learn that she was alive and doing well. I wish she could have been 'present' (not that a newborn would be the best guest at a quiet funeral), but it would have been fun to show her off 'for real' and not just in photos.

As we are approaching 4 weeks out from Kaia's birth I'm getting more and more anxious for her to come home. She's more interactive and responsive and it sucks leaving her at the hospital each day. I realize it could be awhile longer, but as she gets bigger and bigger (almost 4 lbs 15 oz!), it's easier to picture her as a 'real' baby who lives with us and not a 'preemie' who lives at the hospital. She's starting to have some chub on her cheeks and she's definitely longer than when she was born. She fits into preemie clothing now, so I've had fun picking out outfits that will fit her for all of a week or two before she gets too big to wear them. She's still needing a bit of oxygen, but seems to be better at keeping her sats up and doesn't 'dip' as much. Her breathing also seems a *wee* bit slower than it did last week, so I'm hopeful that's a sign of easy breathing to come (soon please?!!)

I must admit, I'm anxious for her to come home not just for her sake (healthier, bigger, stronger...good to go home!)...but for ours. Cuz' holy crap...it is EXHAUSTING having a kid in the hospital. I constantly feel like I should be somewhere else. When I wake up in the morning, I want to hurry through pumping, showering, dressing and get my butt to the hospital...but WAIT there is housework and chores to do. So when I get to the hospital and see Kaia, I'm happy...but WAIT it's feeding time and I have to try to breastfeed (which is not progressing as quickly as I had hoped...but I'm sticking with it). Then I snuggle her for awhile (best part of the day)...but WAIT now it's time to pump again, and then I get hungry and must find food...but then, oh no, look at the time, it's time to pump again... So then I get back on the bus, head home, make dinner...pump some more x 3, then go to sleep, wake up x2 overnight and pump...then wake up for a third time and do it all again. Whew!

The inefficiency of pumping bothers me. Why can't I just sit every morning, throw on a good movie and pump for like 2 hours straight? It would be so great if I could get all my day's milk in one go. Think of the time I'd save!!! Having to stop every 3 hours for 20 minutes at a time and attach myself to plastic bits which I then have to wash afterwards (I have dish pan hands!!), is so tiring. To feed Kaia directly will be more fun and satisfying and definitely more portable as I won't have to plug her into to an electric socket to get her to milk me. To give you an idea of my life right now: Brian and I usually are NEVER late for anything. We are almost always the first ones to show up at any gathering...but today, (BECAUSE OF PUMPING), we were the absolute LAST people to arrive before the funeral started. Almost late to my Grama's funeral because of my boobs...how embarrassing.

We are also busy as we are trying to get as many things done prior to Kaia's arrival home that we can. Most people do these sorts of things in the last 20 weeks of their pregnancies, but since we were a little busy worrying about our child's survival while I was pregnant, we are trying to get them all crammed in now. We have acquired many baby items including a car seat, crib mattress, baby clothes, stroller (THANK YOU EVERYONE WHO CONTRIBUTED...I will do a post specifically about this item very soon, I promise), and bedding set. Others are on order including Kaia's bed room furniture. We have made a registry for a lot of other stuff and my 'real life' baby shower is planned for August 13th.

In all the 'happy' that has been going on with us, there have been a few down moments when I reflect that I should have been doing all of this last year for Aidan. My uncle introduced me to someone at the visitation last night as 'his niece who just had her first baby'. Um...not exactly...but what was I going to say at that point? Funerals are places people feel comfortable expressing their condolences, but feel much better saying "I'm sorry about your (85 year old) Grama (who had Alzheimer's, was almost blind, deaf and had a broken hip)", then they do when you say "Oh, no, Kaia's not my first baby...my first baby died last year at less than an hour old". People have more trouble with that one.

But I can't blame my uncle for his slip. You see, I've done it too.

The other week I was at the hair dressers get a much needed cut. As I was sitting down in the chair to have my hair washed, the hair dresser was telling me all about her son's girlfriend who is due with her first grandchild in December. She was looking forward to the "gender ultrasound" planned for later that week and she was guessing it was a girl. With all this talk, I shouldn't have been surprised (but I was), that she commented on my baby pooch and asked "are you expecting too?" (note: way to make a postpartum woman feel like shit...tell her she looks pregnant. If her baby is healthy and alive, it makes her feel fat. If her baby is dead, it makes her feel fat and depressed). So I told her about Kaia, and how she's in the NICU, but doing well etc. Then the woman asked the dreaded "is she your first?", and I responded in the affirmative.

In that moment I didn't really feel badly about doing so. I didn't really feel in the mood to 'share'. I'm not a regular customer of this woman's and she never saw me pregnant with either Aidan or Kaia, so it's not like she'll ever call me on it. Most of all I didn't really feel like yelling Aidan's story over the noise of running water and blow dryers. It's just not that kind of story. Plus it seems terrible to share your story of babylost-ness with someone who has just told you how excited they are to meet their new bundle of joy. Buzz kill, much?

But then something happened...

I'm not sure if it was me sharing that Kaia was in the NICU or what, but the next thing out of the hairdressers mouth is "My daughter-in-law's best friend was due this week. She went to the hospital and the doctor sent her home saying she wasn't ready to deliver yet. So she waited over the weekend and then she woke up and said she felt different..."

Oh shit...I know what is coming next. I've heard this story dozens of times in the past year...
And sure enough...

"...and she went to the hospital and her baby was dead".

Damn. Some other woman, maybe younger, maybe older, maybe black, white or Asian, maybe richer, maybe poorer, maybe more or less educated...has just become like me. A woman whose baby died before that baby had a chance to live. It's just not fair.

And at that moment, I wanted to go back and tell the hairdresser that I too lost a child...my first...and it was horrible and terrible and yet I wouldn't have taken his existence back for the world. His name was Aidan and he was perfect..and could she please tell this newly bereaved woman that things won't always be this bad? That while life will suck for a good long while, and that there are going to be plenty of sad, depressing and awful days ahead, and while it will NEVER NEVER be okay that her baby died...she won't always feel this bad. Life will get better. She will smile again.

But no, that new babylost mom has to learn that lesson herself, in her own way, in her own time. Nothing I can say, no wisdom I can impart will make it easier. 'Better' cannot be rushed, but nor, thankfully, can it be stopped. Life goes on. It just does.
Kaia says so: 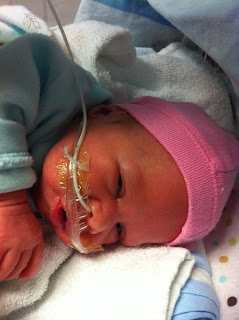