Kaia is doing better. She's still on a tiny bit of oxygen (25mls), but she's not having desats when not being handled, and only a few with handling so she seems better. She does seem to tire after being held for an hour, but I'm getting used to her pattern and am now holding her for a hour while her feed goes in, and then I put her back and she's good again. This actually works out well as an hour is about how long I can stand sitting in the terrible chairs they have in this NICU. They are like doctor's office waiting chairs, not comfortable for sitting in to Kangaroo your baby. I think she might be able to handle longer if I didn't have to move her around so much near the end of the hour because I'm so uncomfortable.

We don't have any explanation as to why she is needing oxygen now, after not needing any while on CPAP during her first week of life, and was doing okay off anything at all during her second week of life. I'm kind of wondering if the fact that she has gained so much weight (relative to her body size) in a short period of time is necessitating the extra oxygen. She's now up to 1925 grams (almost 4 lbs 4 oz) which is only 2 oz away from a whole pound heavier than she was at birth. Oxygenating all that extra weight might just be a wee bit too much for her lungs at this point. I'm okay with her being on a bit of oxygen as long as she's comfortable and not in any distress. I hope she can get off oxygen as she gets bigger before she's ready to come home...but I've read about other pPROM babies needing to come home on oxygen...so we'll just see what happens.

The other thing was that I met the OT today. She is waiting for Kaia to have a hip ultrasound for confirmation, but she's thinking that she might have hip dysplasia. If this is the case, she will likely need to wear a harness (Pavlik harness) for awhile (months?) in order to get the hip to move back into alignment. I knew that because Kaia was in frank breech position, without normal fluid volumes that she was at high risk for hip issues, so I'm not surprised...but it's sad to have another 'problem' on top of prematurity, lung issues, and head shape issues.

The harness I'm expecting will look something like this: 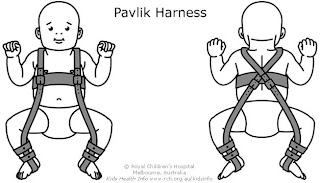 Which of course brings up the issue...how do you dress a child in a hip harness? I think, along with making friends with our local occupational and physical therapists we are going to be a big fan of dresses. I hope we will be one of the 'lucky' ones that gets to remove the harness for an hour a day. I was really looking forward to 'bath time fun!' and if you end up having to wear the harness 24-7, sponge baths are called for.

The good news that I have read about hip dysplasia is that a) it's not life threatening b) if caught early there is a really good chance that the harness will be enough 'treatment', that surgery won't be required, and that no long term complications are expected in terms of walking or hip pain. So yeah for that!

I am doing better as well. I think someone wrote me a comment a while back that talked about moms having their NICU 'breakdown'. I think Monday was mine. I think it had something to do with the fact that I realized Kaia may need to be hospitalized for a little longer than I was hoping. With her amazing 'turn around' so quickly in her first couple of days, I think I was half expecting her to be home within a couple of weeks. There seems to be moms on babycenter who had 32 weekers that were home by 35 or 36 weeks, and that had my hopes up. Now I'm just hoping Kaia will be home by her due date, which won't be until the first week of September. And even that I don't want to cling too closely too. She will be home when she's ready. She doesn't need to measure up to anyone else's standards. She's had a rough road already, and if it means she needs more time to 'bake' in the hospital, we're just going to have to wait it out with her. And we'll do so gladly if it means she comes home healthy.

The other thing that was stressing me out was that Monday was supposed to be Brian's first day back to work. Which would have meant it was my first day on my own. Not a big deal, right? I'm an adult, right? Why should that cause me such panic?

Then I realized...it would be my first full day on my own SINCE MARCH. I literally have not been alone for longer than a few hours since my membranes ruptured. My family and friends (and then the nurses) did an amazing job of watching out for me and staying with me 'just in case something happened' during my entire time on bed rest. I haven't had to make myself a meal, take public transit, or manage stressful situations on my own for months. I got so used to being in 'impending doom' mode that when Kaia started to breathe a bit faster, and needed oxygen I was afraid to have to 'deal' with the situation on my own. Now that things have settled a bit, Brian went back to work today...and you know what? It was okay. I'm okay. I went to visit Kaia today on my own...and it was nice. Quiet and peaceful.

But if we're in for a long haul at the hospital before she comes home, I'm gearing up for it. Pacing myself. Taking breaks when I can. I remember telling parents when I worked in the NICU that they were in for a marathon, not a sprint, and to pace themselves accordingly. Hopefully we're in for a 5K rather than a full marathon...but no matter what, I'm so grateful and happy to be there for her.