I realized I haven't updated about Kaia in few weeks, which I like to do if only to have a record of what she's doing these days.  I'm sure I'll fondly look back at these posts and it's fun to include the details that I know I will forget.

She has 4 teeth now (two top, two bottom) and is transitioning to table foods and cutting back in the milk department.  From the fruit and vegetable section she's had: bananas, raspberries, strawberries, blueberries, apple, kiwi, watermelon, nectarine, cantaloupe, peas, carrots, potato, beans, broccoli, bell peppers, tomato and asparagus and tonight after dinner she tried "dragon fruit".  She likes Graduate 'Puffs', bread (especially when I rip it up and put it on her tray), cheese and enjoys throwing around those baby 'mum-mum' crackers.  She also LOVES being spoon fed yogurt and can't seem to get enough of that nasty looking baby cereal . The other day we gave her some plain cooked spaghetti to try. She spent the whole meal picking it up, waving it around, and then looked confused when it stuck to her arms.  I think she thought we'd given her a strange new toy. It's so much fun watching Kaia try new foods.  She sits with us at dinner and she's like a little baby bird when she's hungry...she sticks her head WAY forward with her mouth open, eyes looking up at us, just hoping we are going to offer her something tasty!

Kaia is starting to use many more consonants including 'ma-ma' and 'da-da' and sort of a 'thhhh' sound which is generally followed by tons of spittle. Sometimes it's so clear when she says Ma-ma or Da-da you swear she's actually talking to you.  I still don't feel she's really connected the sounds (ma-ma) to the meaning yet (ME! Yes I'm your Ma-ma!), so I say she hasn't actually said her first word.  I think the day will come soon though where she'll turn to me and say "Ma-ma", and then follow it up with "Could you be ever so kind as to please go and get me a bottle of warm milk?"...ha, one can only dream.

Kaia still gets 4-5 bottles of milk per day, probably around 600 mls, but has little interest in sippy cups beyond tossing them off her tray.  She understands that the little nub at the top goes in her mouth, and that water will come out of it, but she tends to bite on it rather than suck and she wants ME to hold it while she does this.  She better get out of this habit soon, because I don't think daycare is going to be impressed with having to hold her bottles or sippy cups for her all the time.

In terms of pumping, I'm still easily keeping up with her demands even though I'm now down to 3 pumps per day, making about 900 mls. This is a good thing, because my huge storage of frozen milk (40 litres or 1500 oz) had a bit of an "accident" when Brian disconnected the power to our deep freezer by mistake. Despite the thought of all that hard work (hours and hours of pumping down the drain...literally!!!) I wasn't too upset about this because most of that milk was pumped last August when Kaia was still in the NICU.  Since it was getting close to it's one year expiry date, I figured we'd probably end up tossing it anyway.  I liked having all that milk stored over the winter as my 'insurance policy' in case for some reason my milk started to dry up I knew I had at least a month's worth of food left for her. I knew I would never be able to donate it either because there are no milk banks in this province.

Probably the area that Kaia is slowest in developing is her gross motor skills.  She's been out of the cast since April 3rd and it wasn't until mid to late May that she could confidently sit up on her own (although I was told this was pretty fast at her NICU follow up appointment where they said kids in spicas can take a long time to sit).  She can stand for short periods of time, if supported by a chair or table...but she makes no real efforts to go from one position on her own to another.  These are called 'transition' movements (ie: sitting to lying down, or sitting to pulling up) So if Kaia's sitting...she's sitting unless she falls over backwards.  If she's standing, she's standing in one position (with me closely behind her as she's not very steady) and won't try to take any steps on her own.  If she's on her tummy, she CAN roll over, but seems very stiff and awkward doing it and generally doesn't seem to 'get' that she can change positions to lying on her back if she wants to. It's a little frustrating to watch her struggle, but I know it's temporary and eventually she'll learn how to do these things.  To help her, Kaia is being seen by a nurse from the infant development program about once every two weeks.  The nurse gives me a few tips each time she comes to our house on how to help Kaia with her motor skills, and an OT from the same agency came once to really assess her development.  This was at the end of May so Kaia was just over 8 1/2 months corrected and was falling into the 6-7 month category on some skills and 8-9 on others.  So really not TOO far behind, and pretty damn good for spending 1/4 of her first year in a cast, and 1/6 in the NICU.

This might sound terrible, but I'm actually not sad that she's not getting around anywhere on her own yet.  I'm sure it will be thrilling when she begins to crawl or takes her first steps, but it certainly makes life a lot easier not having to chase after her yet.  A friend of mine came over one time with her 10 month old who was able to cruise and crawl. It was exhausting chasing after this kid.  You had to keep one eye on her at all times. She was also quite destructive, not because she was a 'bad' kid, but because she was young and curious and at 10 months old, didn't really get being 'careful' or 'gentle' yet.  Another friend of mine had a daughter who didn't walk until she was 20 months.  Although she started to get a bit worried about her daughter's development by that point, it definitely made for an 'easier' baby to look after.  By the time her daughter was solidly walking, she could understand if you told her 'no' or asked her to 'be careful'.  This friend never even did any baby proofing because there wasn't a need.  So if your baby does happen to develop later, don't fret moms, it does have some advantages.

My feeling is that as long as Kaia can walk her butt into her Kindergarten class, I'm happy.

I don't want to jinx anything, but all of a sudden Kaia has decided to start sleeping through the night the past couple of weeks.  She'll do AT LEAST 8 hours at a time, and the other night she slept for 12 hours straight!  It was wonderful.  However, there seems to be a bit of a trade off (there always is, isn't there?).  While she is sleeping better, she is taking a LONG time to fall asleep initially at night, or she'll fall asleep okay and then wake up 30 minutes later as if she's refreshed and ready for more play time.  I don't really want to get into the 'cry it out' stuff, because a) we've never done that and I'm afraid if we start it will mess with the sleeping through the night part and b) she is VERY resistant to 'cry it out'.  Kaia's stubborn and will cry, and cry, and CRY, and whine, and fuss, and then be very quiet for awhile and you THINK she's gone to sleep...but no, she's just rallying for the next round of crying and fussing.  Usually if she hasn't started to settle within 10-20 minutes, she's not going to and it's going to take some parental help to get her back to sleep.  While it makes for some crummy evenings since a lot of it is spent trying to get her to go to sleep, I'll take that over multiple night wakings, especially since I'm headed back to work in a month and a half.

Which of course is the other big deal around here.  I'm still looking for a job to go back to in August, other than having to go back to the NICU full time. I've got a lead on a few (including one back at the unit where I was on contract before), but nothing is guaranteed yet. It's a job looking for a job, which is why I haven't been able to blog as much lately.  I spend all of Kaia's nap time looking at job boards and writing cover letters.  I just want to get my back to work place settled so that I can enjoy the rest of my maternity leave.

So that's what's doing in a nutshell.

Oh, and photos of course! 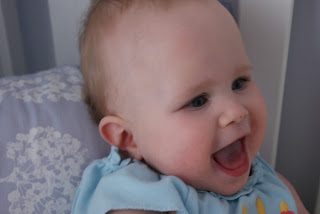