While Kaia is adjusting fairly well to cast-dom, I must admit I'm having a harder time with it. I hate seeing my baby wrapped up in fiberglass (casts are now made out of fiberglass and lined with a soft padding rather than plaster). I hate that she is no longer squishy and cuddly and it bothers me how difficult it is to change her. We have had a few poo-splosion and honestly, they suck. I change her bum many more times per day than I use to pre-cast, but I know that sometimes she has leaks and it BOTHERS me to NO END that pee and poop may at this very moment be sitting next her delicate baby skin and I can't CLEAN IT PROPERLY!!! I can do nothing but try to shove the diaper as far as I can up the hole left open around her lady parts and wipe the inner cast lining that I can reach like crazy when the diaper leaks.

The big problem is that the cast comes up so high. Kaia can chew on the on top part of the cast. It stretches from under her arms down to her ankles with cut outs at her belly and her diaper area. I've seen other babies in spica casts and their casts don't come up nearly so high. I don't know why Kaia's is so large, but it's something I want to talk to them about when she gets her cast changed on February 13th (the cast gets changed once at the half way mark). It probably had to be that high to stabilize her hip, but damn if it doesn't make EVERYTHING so much harder. It's so high, she can't put her arms down to her sides and I can't comfortably breast feed anymore. Not that we breast fed a lot, but usually once or twice a day I'd let her have a bit of a nibble...now we're strictly on bottles because I can't hold a stiff 7 kg kid at breast height for any length of time. Kaia is wickedly heavy in the cast and she can't lay on her side on a pillow as her legs stick out in frog position.

My back has been the other big issue. I've had a sore back for months now and I think I'm really going to have to go for some chiropractor or physio help. The jump that Kaia had from 6 to 7 kg overnight didn't help matters, and it puts a lot more strain on my back now that she's so stiff. No longer can she 'meld' into my body like babies do when you hold them. She's basically like an armor clad starfish.

I know I'm going on and on about this, but in my real life people don't really seem to get it. Even Brian is like "it's not so bad". Everyone keeps saying things like "well it's only for a few months" and "at least it's not life threatening" and "it's a good thing she's a baby, she won't even remember it". My answer to the first is that a FEW MONTHS is a very long time when it's something you have to deal with every single minute of every single day. The cast wouldn't be as bad if we could remove it, even for short periods, but it's a constant thing that has changed many of our daily routines with her.

And yes, of course I'm glad it's not something life threatening...because OH YEAH, we dealt with that LAST YEAR!!! And it was AWFUL. So yes, I understand life threatening, and yes, I'm glad this isn't, but I don't think it's too much to ask to have the words 'normal' and 'healthy' attached to your kid rather that "dislocated left hip".

The one that really gets me is the 'good thing she's a baby' comment. Because yes, it's SO much better that she can't tell me what is bothering her (sarcasm) and I have to guess from the intensity of her whining how serious it is. It's like people think babies are somehow unaware of their environment and 'get use to things' easier than an older child or adult. Honestly, I think that's baloney. Kaia has definitely been more crabby and fussy since going into her cast, and it's not like I can explain to her why she's in it or how it's helping her. All she knows is she can't move her legs and she can't reach her toys like she use to and mommy no longer breastfeeds her or is able to hold her close. Being immobile sucks at any age, which I feel particularly sympathetic to (HELLO BED REST) and causes your body to hurt in ways you never thought possible.

I also wonder what the cast is doing her her psychologically. Maybe nothing. But I wonder if it will affect her mood or personality down the line? I know being in the hospital affected me a lot as a child (although I was older), so whose to say 3 months in a body cast before the age of 1 won't 'scar' her mentally.

Anyway, I know we'll get through it. It's not like we have a choice. It just feels like a very long time, especially now that winter has really set in here. There are no holidays or family parties to look forward to, and I'm fairly house-bound with a heavy, poopy, crabby baby.

The above was written on Saturday. I never get my posts up the same day I write them anymore as I get interrupted by Kaia demands before I have time to proof read or spell check, so I figured I would update in the same post and let you know that we've found somewhat of a solution to the poopy problem.

Yesterday Brian bought a whole box of puppy 'piddle pads'. You know the thin plastic backed absorbent sheets that you use while house-breaking your dog? Yeah those. Brian had the ingenious idea to cut them into 8ths (so they are about 4 inches wide) to act as a 'runner' down Kaia's back to rest between her and the lining of the cast. We tape them lightly to back outside of her cast, then thread them down the back, absorbent side towards her skin, where they emerge from the poop hole cut out in the cast. Then the diaper gets shoved between the piddle pad runner and her bum. If she happens to have a poop that shoots up her back, it lands on the runner and not the cast! We've been sticking with this set up for over 24 hours now and I haven't had to wipe poop out of the cast once. YES!

Also, I made a chiropractor appointment for tomorrow. I'm excited to hopefully get rid of this awful back pain.

And now for some pictures which someone asked for.

The first two pictures are of Kaia 'undressed' except for the diaper shoved in her 'diaper hole'. A larger (size 5) diaper goes over the whole thing to help contain everything, although it doesn't get dirty that often. The second two pictures are her in my new favourite outfit. Brian got her these knock off Baby Legs for Christmas and I love how bright they are. And yes, it does look like Kaia has giant Dolly Parton boobs when she's dressed. Since clothes have to stretch to fit over the cast she's in size 6 to 12 months even though she's 4 months corrected and prior to the cast was just outgrowing all of her 0-3 month clothes.

Without further ado, Kaia, in all her cast glory! 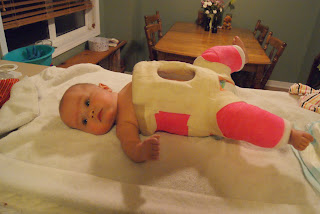 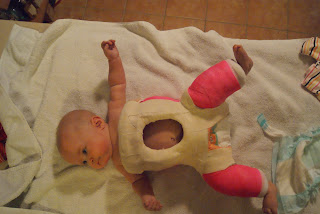 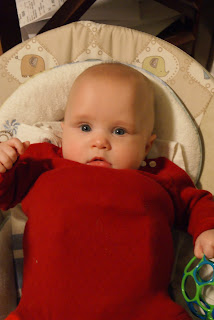 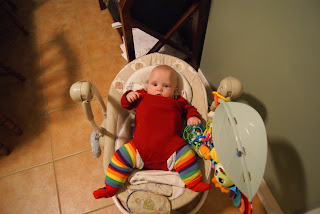